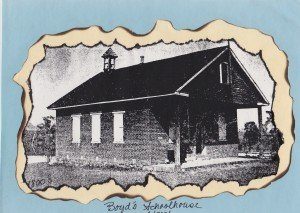 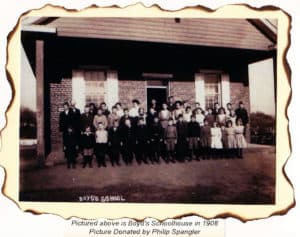 Gettysburg, of course, is know for the historic Civil War battle that occurred in our small town on July 1-3, 1863.  Our dental office building has its own interesting history as well.  We are located in what’s know as the Boyd’s Schoolhouse, est. 1837.  It is one of the original seven schoolhouses in Adams County. A bad snowstorm around 1910 almost totaled the school and it had to be rebuilt. It was used as a schoolhouse until sometime in the 1950’s.

The following are stories as told to us by local residents or people who went to school here:

“There were inside outhouses located to the left and right of the front door, and the teacher’s desk sat right inside the door under the bell pull. The bell in our tower is not the original to the schoolhouse, as it was sold at a sale when the school closed. The current bell was donated to the school by Mrs. Ethel Butterfield.  Also, since the schoolhouse did not have a well, one of the older schoolboys’ chores was to fetch water by bucket from a neighbor.”  Contributed by George Coleman 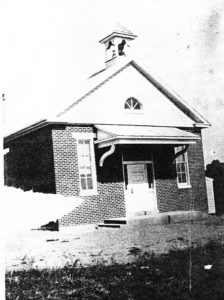 Phil Spangler advised us that his Great Grandmother, Margarette Tipton Spangler, taught at the schoolhouse between 1916-1918. Mrs. Trout taught until the school closed in the 1950’s.

“It is so remarkable that this building still exists.  It brings back many memories of several years here 1941-1948.  There was Hida Weikert, my first love; Paul Toddes; Clair Golden; the Colemans (with a pool); the Arentzes; the Ogburns; and so many more.” Contributed by Rodney Felix.

“Miss “Tom” Spangler (grandmother of Phil Spangler) was 18 years old when she taught at the “Schoolhouse” in the year 1960″  Contributed by Russ Norgan.

“During the Winter of 1929, my father began to draw plans for building a new home on two acres of land he had purchased the year before.  In the Spring of 1930, my father started to build our new home two miles north of Gettysburg, about fifty yards from Boyd’s Elementary School and across the highway from a large dairy farm.  Our home was the first residence that was not a farm to be built between the two towns of Gettysburg and Biglerville.  The things that caught my eye the most were digging the foundation with two horses and a scoop, and plastering over lath on the walls with pig bristles, cement and lime.  We had the house wired for electricity, a well drilled for drinking water and a cistern to collect rain water for bathing and laundering.  By the time the house was completed enough to move in, school was about to open for another year.  As we started school again, my sister was in fifth grade, I was in second grade, with a five year old brother at home.  We all seemed to enjoy this school and the children from the large farms.  There were a total of forty-three children under one male teacher who taught all eight grades.  At that time, it was mandatory, under normal conditions, to go to school until you were sixteen years old.  Some of the upper classes had pupils of that age and about one-third of them never went to high school because they stayed and worked on the farms.  The old schoolhouse had just one main entrance.  As you went in the front, the right side was for girl’s clothing and restrooms.  The left was the same for boys, separated by doors and a small foyer.  Each side had a door for entering the classroom and each side had a large front and side slate board with the teachers desk in the center.  Behind the teacher’s desk was a large closet for him and the rope to pull the school bell.  The back of the classroom consisted of a large cast iron stove on one side and several book closets on the other.  Outside the school building was a storage shed for the coal to heat the building, a steel flagpole and a well with a hand pump for drinking.  I remember that the older pupils either volunteered or were assigned to carry in the coal and water when needed, and to fill the large containers with drinking water.  Each child had to have his own drinking cup if he wanted to drink.  We all looked forward to the Christmas season, when each pupil drew a name from a gift for that person.  The teacher usually set the amount we could spend for the gift, which had to be useful and within reason.  The teacher’s gift was usually one sent to school from individual families.  Every day before the start of classes, the teacher or some older student would read from the Bible and then pledge allegiance to the flag of our nation.  Once each morning and afternoon we had a 15 minute recess, and the boys usually played ball or went sledding if there was a snow on the ground.  One thing that used to excite me was that every year on Ascension Day, for some reason I don’t know, all the boys around home would walk to the creek barefoot to go fishing.  The creek was about one mile away, and along with getting ourselves muddy and having a good time, we usually caught a mess of large blue gills and sunfish to each.  During the Summer months, the school was closed.”  Contributed by Harold E. Hess

“I started school at Boyd’s in the Fall 1930 in second grade.  The grades were first through eighth with 43 pupils enrolled at that time.  The oldest class members came from farms on this side of Barlows Knoll and as far North as Kecklers Hill and the East to Rock Creek and Western Maryland Railroad.  My father built the first home on the Biglerville Road, that was not a farm house, next to the school.  It’s now Adams County Telephone.  All the roads were dirt except the Biglerville Road, and that was blacktop.  Toilets were in back of the school, outside on concrete bases until 1928.  The children came from around 13 families within a mile of the school.”  Contributed by a member of John Miller’s family.

Listed below are some of the families living in the area at that time, prior to World War II (note that some families that went to school here are actual patients of the practice):

Below are some of the actual teachers of Boyd’s Schoolhouse:

Formers occupants of the Schoolhouse:

* Interesting note – Janet Arendt Coleman not only went to Boyd’s Schoolhouse from 1937-1943, but years later she worked for North Gas Sales and Service when they occupied the Schoolhouse.

Article which appeared in the Gettysburg Times on 4/26/16, written by John B. Horner:

ABC to DDS – A Remarkable Journey

There were at one time as many as nine one-room rural schools in Cumberland Township, of which Boyd’s School at 1275 Biglerville Rd., Gettysburg, was one of the oldest.

The Public School Law of 1834 in Pennsylvania specified that the State be divided into school districts and each jurisdiction be required to provide schooling for all its children, financed by taxes to be levied on real estate.  Cumberland Township voted to adopt common schools at its first opportunity which was 1835.  Best research indicates that Boyd’s School was established on or about 1837 and was most likely a wooden structure as were most rural schools at that time, although how it received the name of Boyd’s School remains obscure.

An indication that the log building may have reached the end of its practical life was a notice which appeared in a local newspaper dated May 26, 1862, to wit:  “The School Board of Cumberland District, intending to build a NEW SCHOOL-HOUSE at No. 1 (formerly Boyd’s), the house to be of brick, 24×28, will receive proposals for the same from contractors, and will meet for that purpose at No. 1, on Saturday, the 31st of May inst., at 9:00 AM, at which time and place contractors are requested to attend.  By order of J.A. Harper, Sec’y.”

After serving its constituents faithfully for many years, the school building was almost totally destroyed in a snow storm in 1910, and had to be completely rebuilt.  An existing photo shows that in 1921, the School was comprised of 19 pupils and one teacher.  In the 1950’s, as rural schools were being merged into the Gettysburg Joint School District, Boyd’s School was sold at auction to Leo C. Riley, the land and building for $4,950 and the furnishings for $129.

Occupants of the property since the 1950’s include:  Dr. Joseph Riley, North Gas Sales and Service, the late James Getty for his Lincoln Show, Ken Cole Restaurant and Tavern, Schoolhouse Restaurant (owned by M/M Leroy Baker and later by Michael Redding).  Since January of 2002, the Building has been home to Tully Dental and just recently sported a new state-of-the-art, three dimensional sign as reported in the Gettysburg Times, calling attention to its services.

During its lifetime, the School has morphed from the ABC’s of learning to that of a DDS (Dispenser of Dental Services) a truly remarkable journey!

The continued use of this historic building reflects well on the Cumberland Township Historical Society’s endeavors to call attention to and encourage the perpetuation of our significant older structures.  Our gratitude to Tully Dental!

John B. Horner is a Founding Member and Vice Chair of CTHS, and a relative of the Foulk Family, whose children attended Boyd’s School in the 1920’s. 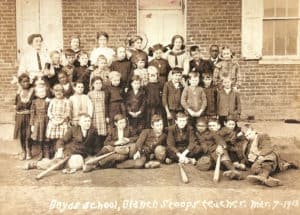 We received this letter from David Helman in Salem, Iowa. He googled Boyd’s schoolhouse and found our website. The girl who is circled is his grandmother, Ida Hazel Fanus. Her maiden name was Gulden, possible relation to other Golden’s in our schoolhouse stories.

We are continually in the process of gathering stories about our schoolhouse.  Contributions regarding its history are always welcome.   Please contact our office if you have an interesting story to share. 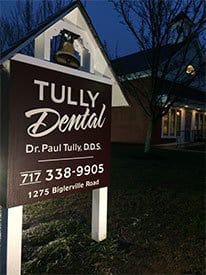